It may be premature to write about this as I don't know exactly how worried to be. But here I am because this is where I go when I'm worried and don't want to harp on things to my friends and family.

Yesterday was E's 6 month check up. I was dreading it. I knew that E hadn't grown much. I was worried the Dr would tell me something was wrong. To give her formula, to get tested for hormonal problems, etc etc. Last time we were there he said he was a little worried about her height falling away from the curve. He said he would watch it and see. Her weight was fine in his eyes, but to me she just seemed so little. 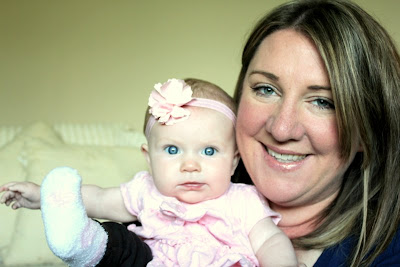 I could tell her clothes weren't getting smaller and I just didn't want to think about it. Anyone who met her or saw her after a while would comment on how tiny she was. I would just smile but inside I was so worried. Why was my baby so small?  So after locking my keys in my car before work that morning, losing a very long and exhausting hearing, I was really, really not looking forward to our appointment.

The nurse was chipper as she lead us toward the room with the scale and measuring table. "Any guesses on her weight?" she sang.

We measured first and I was dumbfounded. "did she shrink?" I asked and made her measure again. No. It was the same as last time. No growth.

She was only up 2oz on the scale.

My heart was pounding as we went back to the exam room. My sweet little baby hadn't grown. My mind instantly raced through the last 6 weeks. She had been eating well. My milk seemed fine. No real sickness. She had recently started sleeping better and we were getting into a nap routine. What the heck?

It didn't help that the Dr. didn't enter the room for another 30 minutes. I was entertaining E all while googling about growth.

The Dr. came in and obviously hadn't looked at anything yet. Once he pulled her up on the computer, he wasn't very talkative and showed me her chart and said he wasn't too concerned. He said her weight was fine and she was very proportionate but her height was still borderline worrisome and if she fell away from the curve at the next appointment he'd order testing. I told him he had said that last time. I told him I just didn't understand, especially given mine and my husband's size. He thought about it and said he thought we should see a specialist. He said he'd refer me to an endocrinologist just to be safe, but that E is probably just growing in her own way and will catch up later.

Ok. I thought. Odd, as I always thought I'd have big kids. But ok. I can handle that.

It didn't even enter my mind until I was home that short could mean dwarf or little person. My heart hasn't stopped racing since the appointment. I don't know how to unconcern myself. If she's short-fine. If she's a little person, we can handle that. I'll love her just the same. I suppose it's just the unknown and the idea of something being "wrong". There's also extreme mom guilt that I've done something to stunt her growth or harm her in any way.

When I asked the Dr. if there's anything I should do or not do he said no. He was thrilled with her otherwise. She was babbling to him and smiling and so aware. I swear she shows off for him! He said she was just amazingly alert and happy and that we are doing everything right. He was very supportive of my breastfeeding and waiting to introduce solids until now. He said this was not an issue of nutrition or wellness in his eyes since she does not look sick and is so proportionate. He said it's either hormonal, genetics or just her own growth rate. He said to see if I could look and see if myself or my husband grew slowly at first. My baby books are packed away while my parents remodel their house, but B's mom sent us his stats and it looked like he was always a normal, above average sized baby. I would bet I was the same.

So now I wait for the endocrinologist to call me for an appointment. I can only hope he calms my nerves or gives us answers. I just can't help this sinking feeling I have as I try my best to will my baby to grow.
Posted by Amy@Fiancé Meeting You Here at 12:04 PM