Next stop was also spur of the moment. I had hearings in downtown Sacramento and decided to stop by House of Fashion afterwards. I had heard some pretty bad things about this shop, but thought it was worth checking out since I had the time. It was a quiet Monday. I arrived and was instantly introduced to my attendant, Mina and her assistant. From then on it was literally a tornado of dresses. I hated the first two they put me in and they seriously had those dresses on and off me in less than two minutes. 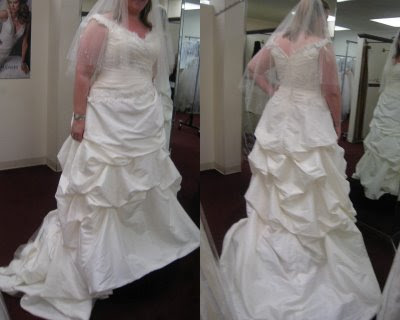 The third dress was pretty, but not quite right. I thought the skirt was really pretty, but it just didn't feel right. I believe it was by La Sposa. 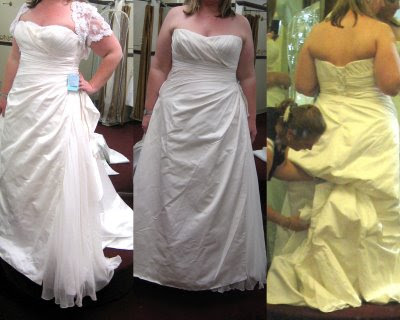 Then I saw the fourth, Nadine by Maggie Sottero. It was like a breath of fresh air. Finally! The simple, asymmetrical dress I was searching for! Mina was seriously a dream attendant. She didn't fawn over me but she definitely knew her stuff. Before I could finish describing the "messy" bustle I was looking for-she had the back manipulated to exactly the look I've been hoping for. Mina was a seamstress for many years and really understood the look I was trying to describe. She even found a lace bolero for me to try with the dress. While I want to have one made from alencon lace, this really helped to give me a visual.
I was so disappointed with how the pictures came out. Part of that is because the sample was extremely wrinkled. Believe me when I say that this dress was really beautiful and fit so well. It was slightly big, but I loved the cut and loved that there was no beading or embroidery!
It was time for some serious decision making!
Posted by Amy@Fiancé Meeting You Here at 9:45 PM