There I was, with my little baby girl in my arms, skin to skin on my chest. My OB asked for her name and we told her and she squealed. We'd really managed to keep it a secret!

B began texting everyone and called my parents who were still at our house, 40 minutes away. They could not believe it and were not prepared to drive out so soon. My mom had been a little sad that I didn't want her in the room for the birth. It wasn't that I didn't want her, it was more that I just wanted it to be B and me. She totally understood, as she had wanted and had the same thing with both me and my brother. But she couldn't help but want to be there. So when we called at 7:15 and said, "she's here!" my mom said she couldn't get to the hospital fast enough! 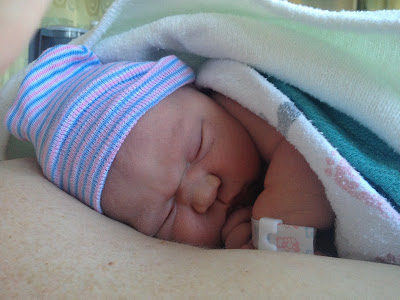 Side note-I'd seen other blogs say to make a call/text list and bring it to the hospital. We did not do that and I regret it. B sent out the majority of the texts, but didn't have everyone's number. I only texted my far away friends. We forgot a couple people and definitely hurt some feelings. Of course they understood that we were not exactly thinking clearly, but especially since SO many of our friends were very much there for us during this pregnancy, we felt so bad that we didn't think to let them know our girl was here safe and sound first thing.

They weighed my girl and I couldn't believe how tiny she was. 7lbs 8oz and 19 inches long. I was shocked. But I had to smile and tell my mom, " I got my 7 pound baby!". I'd said for a few weeks that I'd hoped she was a nice, normal 7lbs. I was over 10 pounds myself so my mom was amused at how excited I was. She replied, "Amy you just got everything you wanted. I can't believe you went into labor on your own".

I was having a hard time believing it myself. I had pretty much given up hope of laboring on my own. 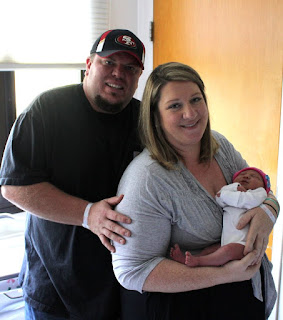 The night before my parents had arrived and we'd gone out to dinner. I was not in the best mood. My parents always get so annoyed with me when I get like this, but I'd warned them before they arrived that I was super emotional and still frustrated with being induced- and did not need a pep talk from them or a reminder that I can't control everything. They were pretty good about it and just tried to keep my spirits up. We watched TV until about 11, I painted my nails with my mom and had gone to bed feeling better. As I crawled into bed that night, I talked to my Grams. I told her I wished she was here and also said, "help me out Grams". I suppose I still had some hope left... 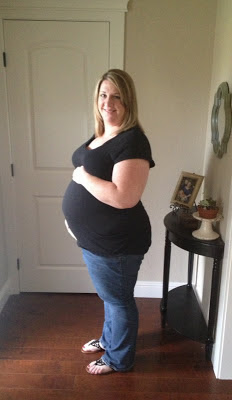 Last Pregnant picture taken 9/21. We went and saw "Trouble with the Curve" that night-might be our last movie for a while!

Ellie instantly snoozed on my chest and my Dr. was still down there cleaning me up. She told me I had a really small tear that she needed to stitch. Despite my total elation, I was still feeling quite a bit of pain and my Dr. could see it in my face. I said, "isn't it supposed to stop hurting?" I was still having pretty bad cramps. She massaged my belly a little and I felt the placenta pass. It was a lot more painful and a lot larger than I'd anticipated. She told me everything looked great and got to stitching. The nurse mentioned my Dr. was the best "seamstress" of all the OBs--good to know!

That part didn't hurt a bit as she numbed me up before she got to sewing. At that point E took to my breast and I was so relieved. Her suckling wasn't very strong but it was nice to know we had made the first step towards breastfeeding. 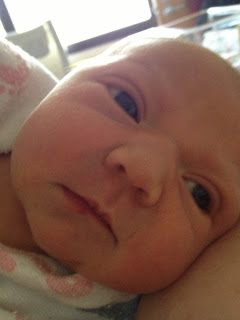 I'm not sure how much time passed, but we were then sent to another room. I met my post partum nurse and she wheeled me into a room that was already occupied. My eyes got wide-I'd never even thought about the chance of having a roommate. I tried not to pitch a fit as she clunked me past this girl's personal items and showed me my bed. It was the smallest area ever and I was so uncomfortable. The nurse apologized and said they were very full. My OB said she would see what she could do. She kept telling the nurses, "this is my very special patient" I was so happy she was the one to deliver Eloise. My specialists were actually the ones who were very in tune with this pregnancy, but my regular OB has been with me for 7 years and she knew what this baby meant to us. Love her. 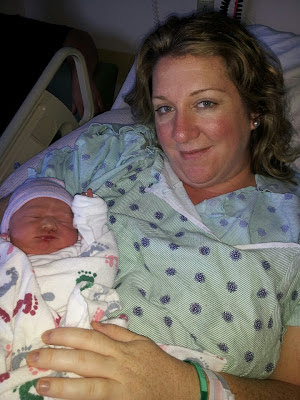 My parents and B's parents and Grandma arrived and visited for a couple hours. B left with them to get lunch and E and I drifted off to sleep. They told me not to sleep with her on my chest, but it happened anyway and it was heaven.

The charge nurse came in to introduce herself. She finished her talk with, "is there anything you need?" I looked at her with my best puppy dog eyes and said, "is every bed full? Any chance of my own room?" she didn't give me much hope but said she'd put me on "the list".

My nurse came in with my lunch and once my tray was cleared another nurse came in and said, "is now a good time to move you to your own room?" I could have kissed her.

I felt so good, I popped right out of bed and we gathered my things. I was so thrilled and felt so special. I don't know if it was my Ob's influence or my begging or some combo-but I don't care-there's no way I would have been comfortable in such tight quarters. Luckily I had come prepared with homemade pumpkin chocolate chip muffins to give to my nurses. I handed her the basket and she seemed so surprised. My Grams had always told me you bring homemade treats when you're in the hospital. I'd never done it until now. It worked out perfectly as I knew I'd be there on Monday, and all the nurses seemed very grateful. Several asked me when on earth I'd baked them. Most of them didn't realize I was scheduled to be there. So I just accepted the compliments and was glad they liked them. 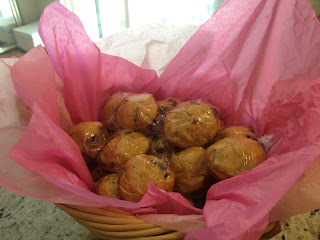 We had several visitors that afternoon and evening. E was awesome. So quiet and nursing like a champ. Her latch wasn't perfect, but she was getting something so I was willing to endure the pinch. My nurses helped and by nighttime she was doing a lot better. I developed a couple teeny blisters that looked like blood blisters on my nipples. My nurse told me to rub my own breast milk on them and also use the nipple cream. It helped....but I was still wincing a little bit with each latch. (by day 3-4 that was a thing of the past). Overall I felt amazing. I had zero soreness "down there" and was up walking around and enjoying our visitors. I thought for sure I would feel swollen and tender, but I never did. My recovery this time was so much easier than my recover with Bremy. It's still hard for me to believe that, but I'll take it!

Despite my own room there was no where for B to sleep. I sent him home which was something we didn't anticipate, but I just felt like I wouldn't relax watching him try to sleep in a chair. So it was just me and E for the night. I was extremely glad that the stand-in NFL Referees blew the call in the Green Bay Seattle game-because not only did I get a healthy beautiful daughter that day--but I also won our football pool! I think the nurses were very confused at my interest in the game. But hey, mama's making money over here!

I hardly slept a wink that night. The nurses came in every couple hours and I was instructed to wake up E to feed at those times. She was sleeping so peacefully, but they said it was important for my supply and for her health as she was likely to skip meals to sleep. This was something I hadn't read about and didn't know, so I was thankful for their guidance. They were all very "pro" breastfeeding and really helpful which made it easier.

Soon the sun came up. The nurses asked if I'd want to stay another night. I didn't, but I also didn't want to rush to leave at 11am (the discharge time) so I asked for a "late check out" and took my time before B and my parents arrived. I got a shower in, met the pediatrician who said E was "perfect", managed to put some makeup on and straighten my hair and get dressed into real clothes. I'm so glad I brought my hair dryer and lots of toiletries. It definitely made me feel human. 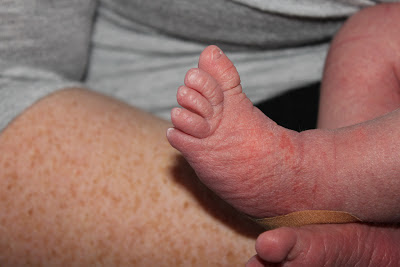 E passed her hearing test and got her pictures taken. By then my family was there, I ate lunch and then we started packing up my room.

Around 230, it was time to leave! I had anticipated being wheeled out in a wheelchair-but that didn't happen. We just walked out-and the nurse carried my baby? I was caught off guard but it all happened so quick and my nurse was kind of hard to understand, so I didn't ask a lot of questions. I'm so glad my parents were there because they made sure we got lots of leaving the hospital pictures! 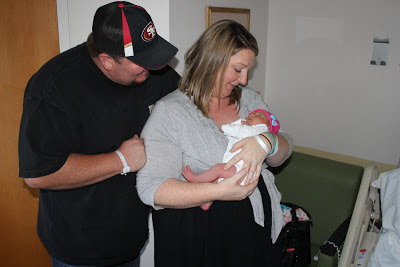 Despite feeling like a car seat pro, I had a lot of trouble getting E in the car seat. I had it set way too small/tight and completely forgot how to adjust it in the moment. It was super hot out which added to my confusion and frustration. My dad helped me while B held E in the a/c and my mom took pictures. We finally got it together and we were on the road. 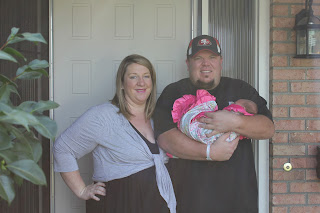 It was just me, E and B in our car and as we pulled out of the hospital parking lot, B reached his hand back for me to hold and said, "We finally have everything we wanted, but I can't help but think of Bremy" I was having the exact same thought and burst into tears for the first time since E was born. He seemed startled by my insta-tears and tried to calm me down. I looked down at E and felt such intense emotions. I'd been to the hospital twice weekly for testing, my specialists office was across the street--I'd driven out of this neighborhood many, many times-but suddenly it was like we were leaving without Bremy all over again. Luckily, my sadness dissipated by the time we hit the first stop light. E was sleeping so peacefully and even though that hole in my heart was still there, my heart was more full than it had ever, ever been. I put my chin down on her car seat and tried not to blink. I just could not take my eyes off of our precious girl.

Posted by Amy@Fiancé Meeting You Here at 11:02 AM