I ditched the stitch!

Today my cerclage was removed. It wasn't very fun, but not too bad. Luckily it only took about 10 minutes. No drugs or iv, just in and out which was nice. I actually kept the stitch. I did NOT think I would want to, but once I saw that it wasn't some nasty thing full of blood and flesh, I decided I wanted it. That thin piece of material literally gave me a healthy baby. I owe a lot to that sucker! I've included the picture at the end of the post. Feel free to skip looking at it, but honestly, it's not scary.

I got a little emotional on the way to the hospital. I packed up my hospital bag, baby bag, camera etc, just in case. B actually met me there as he had to get some work done this morning. So I was alone, on the familiar stretch of highway I've traveled so many times during this pregnancy. There weren't many cars on the road and as I was looking around at all the familiar landmarks, I realized how many times I'd worried so much on this drive. How many times I never thought we'd make it to this week. How many times I cried on this drive. And now, here I was. I was living the day I never thought would come. Getting my cerclage removed was something I had hoped for, but never really thought would happen. At least not the way it was supposed to!

We had great care at the hospital, and even though I had to see my very least favorite perinate, she was nice and seemed to get the job done with ease. She had a student observer with her, which is always fun, but hey, hopefully he learned something! I definitely had to squeeze B's hand as she dug around in there (that's pretty much what it felt like) but I just kept repeating in my head how lucky I was to be there. How the pain I was feeling was something good! It worked! I didn't make a peep. She checked me after the cerclage was out and told me I was 1cm dilated, cervix felt long but soft and baby was still up pretty high. She said they'd watch baby on the monitor for another 40 minutes or so and then we could leave.

Baby looked great and B and I headed to our favorite Mexican spot for lunch. I just got home and have tomorrow off. I have some work I'd like to do Monday and Tuesday, so hopefully she stays put for a little while. I'd love to get further along but feel confident she will be born healthy even if she comes tonight.

I'm not sure if I ever mentioned it here, but as soon as I learned I was pregnant and then calculated the October 1st due date, I always had a feeling I would deliver on September 7th. No idea where it came from, if it's just because I like the number 7 or what. But that's been the feeling. So that's tomorrow. None of the doctors think it will be that soon, so I'm not counting on it, but we're just prepared for anything at this point.

I'd been nervous about what to expect from laboring this time around, but doctors have assured me that at this point  I will feel the labor and know when to come in. My Ob is still convinced I will go several more weeks and that she will have to induce me. They induce by 39 weeks with gestational diabetes. I really, really don't want an induction, so hopefully she comes on her own within the next two weeks. So crazy to think she could be here so soon. I still just can't believe it!


And here's the cerclage picture....hard to believe this little thing is what kept our little girl safe and sound! 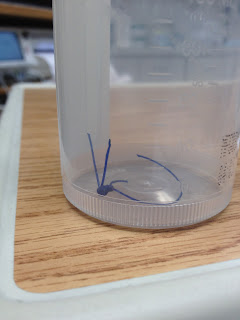 Posted by Amy@Fiancé Meeting You Here at 3:56 PM