Today was my last appointment with the perinatologist. I didn't realize this was the last one until the Dr. said so. Crazy!

Baby was measured via abdominal ultrasound and everything looks right on track. She was measuring about 5 pounds, 9oz. My fluids looked good and the Dr. could see the baby "practice breathing" on the screen which was pretty cute.

Although he had said there would be no cervical check, he decided to do one anyway. He said he couldn't get a good enough look abdominally. He measured and my cervix was nice and long with no visible funneling. I was surprised. I was prepared for him to tell me I was dilating a little.

He said I could return to work (I didn't admit that I'd been working once a week despite his instructions). He scheduled me for my cerclage removal on 9/6 and wished me well. It was so strange. I'm pretty sure he said something to the effect of, I'm done with you! It sounded much less harsh in his little French accent.
He said my regular OB would probably remove the stitch and my regular OB would deliver. I do love my OB, but I have so much trust in these specialists and really wish they could just see me through and deliver my baby. I've seen them so much more often, but I know I'm in good hands either way. 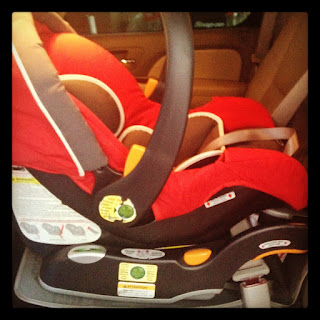 I'm definitely feeling more pregnant as of late and get worn out pretty easily. The summer heat certainly doesn't help. I did manage to install the car seat this morning before it got too hot. Car seats are kind of cumbersome, but I managed. It is pretty surreal to see a seat back there. I installed it in our SUV, which I don't currently drive every day, but it will be baby's primary mode of transport. I got an extra base for one of our other cars, we'll have to see how that all plays out. I also threw the Maclaren snap and go stroller in the back.

I'm working on our hospital bags, too. It feels like I don't have a ton of time left.