When the SF Giants won the World Series in 2010, my husband cried. I've never, ever met a bigger fan than my husband.

B is just as passionate about his beloved Forty Niners. I have always loved, loved sports and get very very into games. Shouting, jumping, screaming-I'm that girl. I'm pretty sure I embarassed myself yearly at my little brother's little league games. We'll call it competitivly passionate. Since I'm not the best athlete, I really enjoy rooting others on. So this was definitely a trait that brought B and I closer while we were dating. Slowly, this Southern California girl became a fan of his bay area teams and am right there with him, cheering them on.

This past January, our beloved Forty Niners made it to the NFL divisional playoffs. We've watched the Niners struggle since we've been together, so this was a big, big deal.  B and I wanted to go to the home game against the Saints SO bad. Two nights before the game, I threw caution to the wind and bought some tickets. In my mind, I knew it would be close to a once in a lifetime event. We still kick ourselves for missing the Giants' playoff games during their World Series. We were pumped because we landed some really great seats. High enough to see the whole field, close enough to actually see. 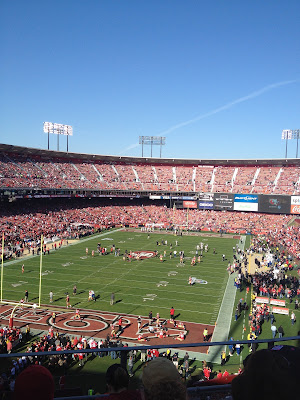 This was our view. The most exciting plays of the game took place in this end zone. We loved our seats!

We tailgated with several close friends who are just as passionate. I'll admit, leaving at 7 am to get to Candlestick by 830 was a little rough, but we wanted to make the most of our day. 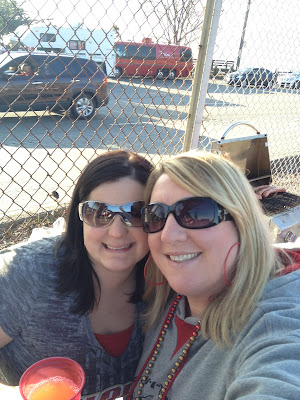 Enjoying a little pregame mimosa with S...sorry baby, I did not think you were in there!

The 49ers beat the Saints in an epic game. It was far and away the best live sporting event I had ever been to in my life. Our seats were awesome and we had some great fans surrounding us throughout the game. I most definitely got into it and could not believe I had a voice left afterwards. The fans were on it that day, I've never experienced anything like it. I think it might have been one of the best things I've ever been a part of. Seriously.

When they won, it was complete chaos and celebration and I'm going to admit that I literally peed my pants. Yes. You read that right. It was so close, and so action packed that when Vernon Davis caught for a touchdown in the final drive of the game,  I lept out of my seat, used B's and the stranger next to me's shoulder to catapult myself into the air. While doing so, pee came out. Yep. Not a lot, but enough to be like-ummm, was that pee? That's how out of control excited I was. Watching youtube clips of it still gives me chills. It was just great football. The game had been going back and forth and to win like that was just too good. Unfortunately, the 49ers would lose the next playoff game to the NY Giants. We were not at that game. And I'm glad. We watched it mournfully from our couch.

So why am I writing this post now, in the middle of baseball season? Well, a little known fact is that our sweet baby girl is a 49ers divisional champ baby. You see, when the Giants won the World Series in 2010, they had a little promo going for the baby born exactly 9 months after the win. The baby born closest to that time would be pronounced the "Giants Baby".  It's been a cute promo. While, technically babies aren't born exactly 9 months after mating----no one seemed to care. 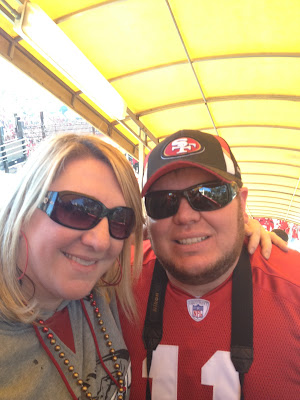 The promo made me realize that our daughter was conceived the week leading up to the 49ers game, and since it takes a bit for conception to actually occur- it's very possible the point of conception was during that game. Kinda fun for us to think about, even though some might find it over-sharing.. Obviously baby girl wasn't made at the game (not sure how that would have worked) but the times line up as I found out I was pregnant two weeks later.

Still not sure when little miss will be born, but we've given her the self imposed title of our little "Niner Baby". We are ready for football season!
Posted by Amy@Fiancé Meeting You Here at 5:07 PM