The Day we Knew

Today, I found out you existed. I had gotten a negative pregnancy test on Monday, but by today (Thursday), my monthly visitor still hadn't showed, so I decided to test again. I was about 90% certain it would be negative, so I set it on the counter and started to run a bath for myself. I had some reading to do, and was enjoying an afternoon off from work. I settled in to the nice, warm bubbles and realized I hadn't looked back at the little white test resting on the counter. I leaned as far as I could to reach it and in my effort, it fell on the lid of the closed toilet. Before it even settled in place, I saw the very pale pink lines. There was a line I'd never, ever seen before. I picked it up and began examining that line as best I could. It was definitely there! My heart immediately burst and for some reason I just started to pray and say thank you aloud. Tears welled up in my eyes and I had no idea what to do next. I jumped out of the tub, dried off and instantly went to find another test. Our dear friend, S, had told me to buy a bunch of pregnancy tests from the dollar store, and to keep some more expensive digital tests as confirmation tests only. So I had to go find our digital tests in a hurry. It didn't take long for that test to flash "pregnant" on it's little screen. 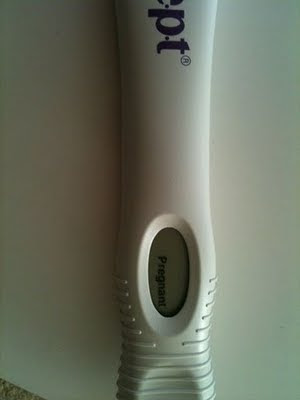 Your daddy was still at work. I was bouncing around the house, trying to figure out how to tell him. I called him to see what time he thought he'd be home (something I do almost everyday) and he said he was one hour away. "Okay," I told myself, "I can wait that long". I tidied the house in anticipation. I put the digital test in a baggie and sealed it into an envelope. When daddy came home, I told him I had an early birthday present for him. I handed the envelope over, and without even looking at it he said, "Are you pregnant?". I had wanted to video his reaction, but I was too shaky and he was too quick! "Yes!! I screamed, and wrapped my arms around him. It took him a good five minutes to really process the information, even though he said later he could tell something was up when I called to see when he'd be home. I thought I sounded cool as a cucumber! Still, I could tell he didn't believe me at first. Finally he opened the envelope and saw for himself. Then I saw the tears. He didn't cry, but he was definitely misty. He has wanted you for so long!

He then began roaming around the house, pointing out all of the things we would need to change before you arrived. Where your room would be, what we would do with the things currently in that room, etc., etc. I guess that's just how your Daddy is. Meanwhile, I was just savoring the moment.

The Giants lost tonight, but nothing was going to damper Daddy's mood. We both smiled and literally giggled all night. Neither of us will ever forget this day!
Posted by Amy@Fiancé Meeting You Here at 11:04 PM