You decided to give us a little scare this week. After we found out about you, I had some cramping and some spotting. I, of course googled everything and was very concerned that you weren't going to "stick". Many mommies lose their babies at this very early stage. Even though we'd only known about you for a couple days, Daddy and I were so upset that you may leave us. Luckily my cramping stopped, but my spotting only got worse. I called my Dr. and she said to come in. At 5weeks 3 days pregnant, I had an ultrasound and saw a little sac and a little yolk sac, but no baby yet. They told me you were too small to see yet. The size of a poppyseed! I was excited that they told me things were "normal".

Right after our appointment, Daddy and I went to Opening Day at AT&T park to see the Champion Giants return to their home turf. It was a really exciting day at the ballpark. We even talked about when we'd get to take you there! About the fourth inning, I started to feel as though something was wrong. I went to the bathroom and saw a lot of blood. I was so scared. Thankfully, your Auntie K is now a Dr. and an OBGYN at that. I was able to text her and she calmed me down so that I could enjoy the game. She said the blood may have been caused by the internal ultrasound I had hours before. That put my mind at ease, and I was able to watch the rest of the game. Giants beat the Cardinals in the 12th inning! It was a really exciting game to see in person. 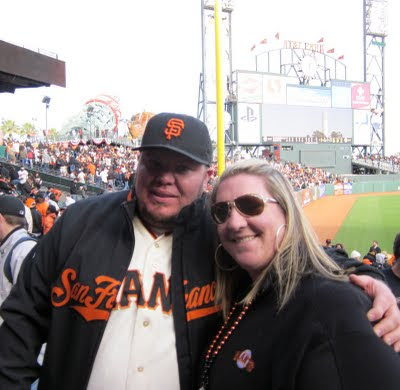 Daddy knew I was upset, and took me out to dinner and calmed me down. The next day the bleeding continued. I was pretty worried we were losing you, but wasn't going to give up hope just yet.
Posted by Amy@Fiancé Meeting You Here at 11:50 PM