How Far Along: 18
Size of Baby as Relative to Common Household Fruit or Vegetable: Length of a bell pepper
Total Weight Gain: Hopefully holding steady at 9lbs. My bump is definitely noticeable now. I love it. I mostly wear maternity pants but can still fit into two pairs of work slacks which is nice. All of my normal tops still fit since I tend to like longer things.
Gender: BABY GIRL!!!!! 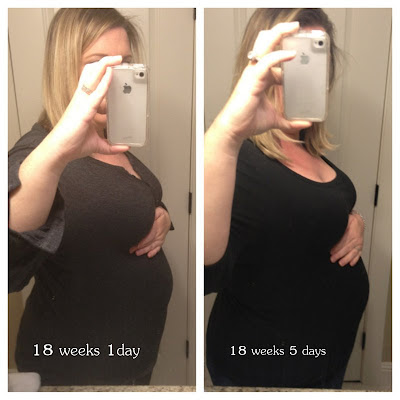 Movement: still not consistent. Baby is sitting pretty high. It's hard for me to feel her. But she reminds me she's there almost once a day
Sleep: Have not been sleeping well the past week. So hard to find a comfortable position.
What I miss: I've done my best not to post this here. But, when you have a cerclage you are put on strict "pelvic rest". I'm just going to leave it at that.
Cravings: no real cravings
Symptoms: My center of gravity is definitely off. I also feel heavier in general. I've seen stars a few times when standing up too quickly and confirmed that it's common for that to happen around this time as your blood pressure tends to dip.
Best moment of the week: Deciding on a name with B. I had thrown around a few different names. He'd mostly shot them down, but not 100%. There was one full name that I'd never considered that I threw out there. The next afternoon he called me and left me the sweetest voice mail saying he'd thought about it and loved the name. I saved it. His voice was just so precious as he said it.
Worst moment of the week: I previously posted about my less than enjoyable Dr.'s appointment.
I'm so ready for the next 5 weeks to roll on by.
Posted by Amy@Fiancé Meeting You Here at 3:32 PM