The Story of A&B, Part I

Within two hours of being at work this morning about ten different things when very, very wrong. I was running in about ten different directions when I got a call from DF. He told me he was waiting outside my office. Since our door requires a pass, I ran out to see what was up. We often go to lunch together, but it was a little early. I was kind of annoyed, but also glad to escape the chaos of the office for the moment. I saw the flowers before I saw him. A beautiful purple hydrangea plant in a gorgeous brown basket. Tears came to my eyes as I realized that he had remembered our three year anniversary. 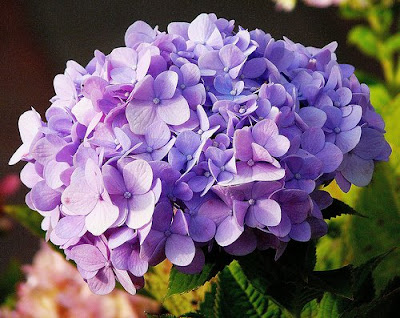 Originally, I didn't intend for this blog to get very personal, but I have enjoyed others' posts about their relationships and their own love stories, that I thought I'd give a cliff notes version of ours (ok, turns out I went into a lot of detail-so I decided to break it up so it's not a novel)

I've mentioned before that DF was the fourth person I met through match.com. MOH and I joined match together when we moved to Northern California from San Diego. I was living in a brand new city, my new roommate had a boyfriend and I was bored, curious and in a place where I was very open to new possibilities.
I actually really enjoyed the first two guys I met on match. The first guy wasn't looking for anything too serious-we went out a few times, had our fun and realizing we were both "just looking"-we moved on. Guy #2 was a total sweetie. Or so I thought. He took me on a really great date-very well thought out, very romantic and very fun. I was totally into being wined and dined. We had a pretty immediate physical attraction, but our conversation wasn't the best. When he cancelled our plans to meet again I was kinda bummed.
Ok, I was a lot bummed. The night that I was supposed to be out with him (he cancelled the day before) I was home alone and feeling pretty pathetic for being so upset about a guy I barely new. I logged on to match and started to read some emails that I had previously ignored while I was busy having fun with guy#2. I saw a short and simple email complete with happy faces shaped like baseballs. While I thought this guy was probably not looking for anything serious (his profile had one very cropped, very blurry picture), I decided to write back. I got a response about twenty minutes later. Yeah-definite creeper, I thought. He's home on a Saturday night too? But, we were instantly exchanging witty emails. He already had me laughing--and intrigued. After three emails back and forth I realized I was flirting via Internet! I went to bed that night with a smile. I was completely caught off guard by this short but sweet exchange.
Posted by Amy@Fiancé Meeting You Here at 8:50 PM