The Story of A&B Part III: You Had me at Bear Hug 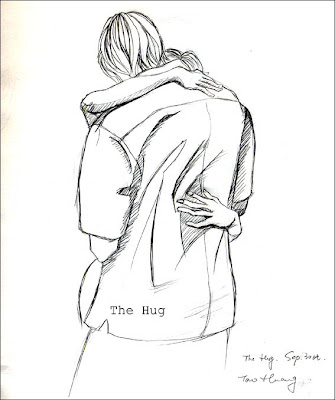 image source: here
read part I here
read part II here
I realize how horrible this sounds, but DF and I often preface our first date story by admitting that it sounds like the intro to one of those 48-Hour Mystery shows. You know, the ones where the highly rational law student disappears when she secretly meets up with random no-profile picture Internet boy? Where the best friend is shown tearing up as she explains that this was completely out of character. Cue dog search scene, childhood photo montage and the slow-talking narrator and you're hooked.

Needless to say my risky, completely out of character behavior paid off. But I still get raised eyebrows when I give the details of our first meeting.
After two weeks of incredibly lengthy and intimate phone conversations things were getting too intense. I started to feel as though I really, really knew him, yet, the lack of physical knowledge was becoming overwhelming and, well, kinda weird.
Looking back I'm not sure why we didn't just meet up for a quick bite. I guess we both knew that whenever we did finally meet, there wouldn't be anything quick about it. Unfortunately the upcoming weekend wasn't looking very good for a date. My best friend (MOH) was having a huge birthday bash. She lives about two hours away, so I was trying to decide what to do.
Luckily I was able to convince DF that a Friday night date wouldn't be so bad. He had been hesitant to do anything on Friday because he usually worked pretty late. Fortunately he was able to get away in time to prep for our very first meeting that particular Friday. DF's home was about ten minutes away from my apartment. Since I knew he would be rushing home from work, I offered to meet him at his house so he wouldn't have to pick me up.
I know.
Honestly, I have NO idea how this became the plan. I would NEVER advise anyone to do this. Hello? Danger! Danger! Right? But for some reason I had absolutely no doubt that DF was the most genuinely honest and sincere man I'd ever spoken with. Aren't serial killers usually really convincing? Yeah--I realize how it sounds. But there was just something inside of me that made it seem completely normal.
So Friday night. I'm prepping for my date and also packing for my trip to visit MOH for her birthday. My plan was to leave from our date and drive out to her house late that night. She was the only one who knew about the date--and she insisted on knowing all of his information (good, level-headed friend!)
I called her as I made my way over to his house. I wasn't scared nervous but I was giddy nervous. I pulled up and the house looked dark. I told her I was hanging up. I was walking to the front door. She said she was calling me back in five minutes.
As I gathered my gift for him (homemade chocolate chip cookies) I saw the blinds in the front window move. Oh God! He's watching me! I started to feel actual nervousness at this point.
He opened his door with a huge bouquet of pink roses. I don't even think we said anything at that moment. There was about a quarter-second where I questioned whether it was him (I had only seen one very old, very cropped picture).But before I knew it I was wrapped in a bear hug on his front porch. I've never felt a bigger shift of emotions than I did in that moment. I went from anxious ball of nerves to instant ease and comfort.
He ushered me inside and gave me a tour of his house. Then suddenly, we shared our first kiss. I know, I know. This date is so ass-backwards: we talked on the phone for way too long before meeting, I showed up at his house, now I was kissing someone before they even bought me dinner! But let's just say that I'll never, ever forget that moment. We still talk about it with a certain glow.
Posted by Amy@Fiancé Meeting You Here at 10:00 PM