The Story of A&B Part II: The Butterflies

In the week following our initial email exchange future DF and I spoke on the phone every single day. The first time he called was on a weeknight. I was a first year law student at that point and literally had about one hour of down time before I went to bed. I spent three talking with him that night. The conversation was effortless. 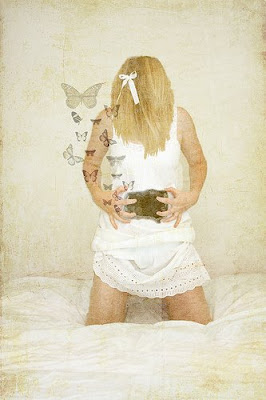 photo: flickr
As the weekend approached, I began to expect a date. Picking up on my anticipation, he apologized and told me that he was hosting a poker party that weekend and wouldn't be able to meet up until the next weekend.
"Um?" I responded, "you're having a 36 hour poker party? You can't find a moment to grab a coffee or something?".

He laughed, "I know, most guys do a coffee date, but I already know I want to take you to dinner. Believe me, I'll be ready to take you out next weekend." I was a little confused, but didn't let it get to me. I had no plans for that weekend, so I logged on to match and opened another forgotten email. Responded. Had a date. Went on date. It was the worst.

As I was walking away from failed date with guy #3, I flipped open my cell phone and started to dial DF's number. I knew he'd get a good laugh out of this awful guy. I remember pausing just before hitting "call"-realizing that it was entirely inappropriate to complain about failed date to a guy I'd never met...so I scrolled down and dialed MOH.

I did speak with DF that night. He called me late. "Aren't you at your poker party?" I asked, hearing voices and music in the background. Apparently he called me as soon as people started leaving. I could hear him telling people he was talking with me. They seemed to know who I was!I melted. I knew that we were both on the same page. That night we talked until five in the morning.
The butterflies started that night.
I didn't tell anyone about it, it almost felt like it wasn't really happening. Who does this? I thought every time we would finally hang up the phone. Needless to say, I was dying to meet him. Would I really have to wait another week?
Posted by Amy@Fiancé Meeting You Here at 12:10 AM