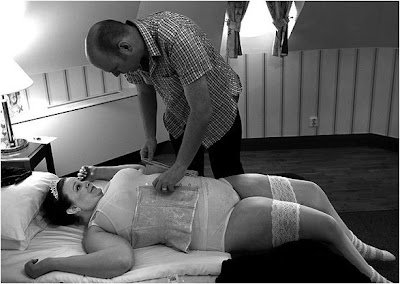 I don't want to go on forever about how much I've been struggling with my weight lately. I'll just say that since the bar (last week of July) I've gained. And I'm struggling. I just joined Weight Watchers online. Total whim. I really don't have the money for it, but something has gotta give and I think the per month fee is worth it.

I called B at work and told him all about it. He was so encouraging and said he really wants to do it too. This is really horrible to say but we saw some engagement pics recently of a couple we barely know. They are both significantly overweight and the photos, while beautiful, were awkward. I think it finally hit both of us. We have to get healthy! I think B looks great, but I've seen pictures of him in better shape and I know he aspires to get back to where he was about five years ago.

I've been incredibly motivated by Cyd from The Sweetest Occasion. She looks absolutely amazing and is continuing with her journey toward a healthy body. Her pictures blow me away and her commitment is out of control. I also know there are several bloggers out there who are succeeding on WW. I just saw that Abbie has lost another 2 ell-bees! So awesome! I can't wait to post about an actual loss!

Ok. Deep breaths. I know I can get a grip on this. I didn't think it'd be this hard, but so be it. Ready. Set!
Posted by Amy@Fiancé Meeting You Here at 2:25 PM